"Within 10 years, the slip joint will be the most commonly used connection in the offshore wind industry"

An interview with Reinder Jorritsma and Robert Hasselaar (DOT) about the SJOR project.

The offshore wind industry finds itself at the beginning of an unprecedented challenge of installing the number of wind turbines needed for the energy transition to be successful. Reinder Jorritsma and Robert Hasselaar both firmly believe that innovation is required for getting the industry ready in time. And for this innovation to succeed, “you need to be ambitious and take the larger steps that enables you to move towards offshore testing as soon as possible. Innovation is therefore also about taking risks and allowing yourself to make errors: you learn the most from making mistakes, not from trying to mitigate them.”

Within DOT, a Dutch start-up based in Delft, pushing technology development is at the core of the company. Due to this focus, the company already plays a significant role within offshore wind innovation. One example of DOT’s initiatives is pushing the development of the slip joint connection; a technology that replaces flange-to-flange and grouted connections currently used in the industry with a simpler alternative. Based on two conical shapes, installation of the slip joint is done by simply sliding the two sections over each other, creating a friction-based connection. This type of connection has clear advantages over the currently used connections; it is faster to install, requires less handling and reduces the need for specialised equipment and components.

The slip joint is not a new concept with the first implementation dating back to the 1980ies. Although the concept was promising due to its simplicity, development had come to a standstill until around 2015 DOT decided to take up the challenge and further develop the slip joint into a commercial offshore wind product. As a first step DOT partnered up with the Delft University of Technology and asked Sif to fabricate a 4m diameter slip joint so it could be tested in an onshore set-up in 2016. After this successful trial DOT initiated the Slip Joint Offshore Research (SJOR) project.

As part of the GROW consortium, the SJOR project proved that with the right focus innovation can indeed proceed effectively. The objectives of this research project were to demonstrate the slip joint technology offshore at real-life scale and investigate its long-term performance in a series of parallelly executed laboratory tests. Thanks to a very fruitful and enjoyable collaboration between the project partners (SIF, Van Oord, Delft University of Technology, TNO and DOT) all set goals were achieved, resulting in a proof of concept for the slip joint: A complete, fully reviewed, slip joint design procedure. To increase the development speed even further, certification via DNV-GL was included leading to a level A type certificate for this innovative technology.

After this successful offshore demonstration, Van Oord managed to take the Slip Joint concept to an operational full-scale version in a commercial wind farm (Borssele V) with project and component certification. The Borssele V design was made possible with additional R&D activities carried out in the excellent laboratory facilities of TNO and WMC.

Now the consortium is eager to share their knowledge: “We firmly believe that in a few years’ time the slip joint will be widely used. Especially since the slip joint is not only suitable for the installation of the next generation of wind turbines directly onto its foundation but it can also be used for other interfaces within the wind turbine, such as the monopile-monopile, tower-tower and tower-nacelle interfaces.”

As project manager for all DOT initiated slip joint projects Robert adds the potential he sees for the use of the slip joint as a sea fastening concept. This concept allows safe transport and handling of towers, nacelles and even fully assembled wind turbines with the option of a safe, controlled and fast disconnection from deck. The latter allowing wind turbines to be installed within minutes from deck to foundation. Furthermore, the slip joint already proved itself to be an enabler for installation by means of heavy lift vessels due to its high installation tolerances.

Reinder and Robert are proud of the excellent cooperation between the project partners in the SJOR project, stating that a good involvement of all partners in the project is essential. Reinder explains that the division of roles was clear from the beginning which allowed us to continuously anticipate quickly, which is key in such a complex project.

During the SJOR project for instance it soon turned out that the required budget had been underestimated, but we were ultimately able to solve that by shifting scope between partners and redistributing subsidy. Robert adds that he is also full of praise for the excellent cooperation with Heerema Marine Contractors. “With their fast-sailing Heavy Lift Vessel Aegir, the offshore installation of the wind turbine including slip joint was carried out, and that went perfectly.” The project team is also indebted to Eneco, who allowed the test to be carried out within the Princess Amalia Wind Farm.

According to these two project coordinators, external communication is also important. A lot of photo and video material was made of the entire offshore campaign. “You might as well not have done the project without visual documentation. Seeing makes you believe.” We received the most attention though thanks to an unexpected source. During testing, the project was visited by a 25-meter whale. This yellow whale - also called fin whale - is rare in the North Sea and was not observed in these waters in the last 20 years. “Images of this mammal went across the country and we received many calls by the media.

Finally, Reinder would like to say that by pushing one innovation and going offshore at a real-life scale creates the opportunity to add tests of other innovations at the same time. During the SJOR project for instance multiple different tests were executed; installation and removal of a monopile using a Vibro Lifting Tool, use of a floating installation vessel (operating on DP) for the installation of the monopile as well as a single-lift installation and removal of the wind turbine. “All actions that had never been done before in this industry”. In addition, Robert says, we were able to test a 500 kW turbine with DOT’s hydraulic drivetrain at sea for a year, providing us with invaluable data and experience. Know-how that is now being used in developing our hydraulic pump in the DOT3000 PTS project. 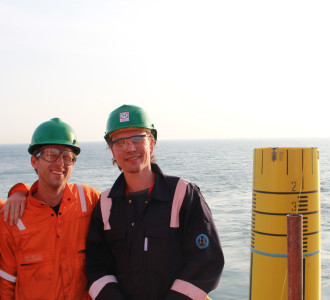 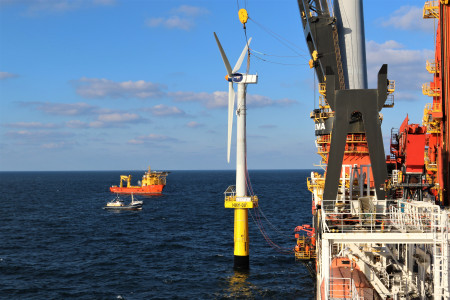